Why you should block Ads

As someone who has been on twitch for 5 years and a twitch partner, I have always hated Ads. They are dumb. Ads are for baby boomers. Just look at Facebook the only social media platform boomers use. Facebook is spammed with countless ads, they tracks EVERYTHING you click on the site even and target ads based on your data. Facebook even tracks people when they are Not using Facebook.

Platforms with younger users don’t run ads. It’s a terrible way to monetize. Look at Netflix. Not a single Ad. People would rather pay money, then get spammed with bullshit. Ads don’t even work on most people. When was the last time you saw an Ad and went “WOW! I really should change car insurance companies!”. Probably the biggest reason why new companies are avoiding ads, they don’t want to be beholden to advertisers.

I’ve never ran Ads on my stream, (except for preroll ads which are automatic) for a few reasons:

Streamers have no control over what is advertised

Twitch has complete control over what is shown.

In the past this simply meant viewers getting ads for crappy games, movies, political candidates, energy drinks ect. Recently twitch has received backlash for advertising OTHER STREAMERS.

What incentive do streamers have to run ads when twitch tells their audience to go watch someone else?

Streamers make almost nothing from ads

That means every time someone clicked my stream they watched a 30 second ad.

What percent of my revenue do you think 10,000 ads should be?

Compare that to twitch subscriptions. I made about $300.

It gets worse when you take into account donations. Let’s say ONE person wants to donate $10. They see an ad and think, “oh… this streamer gets ad money, I’ll donate $10 to an egirl instead and she will notice me instead…”.

That $10 lost is worth more than EVERY ad.

A year ago twitch prime users could watch streams ad-free. But twitch removed that last year…

“Advertising is an important source of support for the creators who make Twitch possible. This change will strengthen and expand that advertising opportunity for creators so they can get more support from their viewers for doing what they love.”

This is simply a lie. If you want to support a streamer, watching ads is the worst option. I made $7 of 10,000 ads. Subscribe to them, buy their merch, donate.

Watching ads is for boomers.

Click a random stream and wait for an advertisement.

You should see this

shield icon in the top right of your browser. Click it and you will see a dropdown. 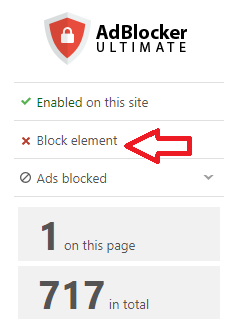 Now click on the ad being played and you should no longer get ads.

Twitch likely will eventually “subvert” certain ad blockers, which means the above method could stop working.

The “Ronald” method is a way to permanently stop getting ads. What Ronald does, is install a new ad blocker whenever he sees an ad.

The idea being, whenever twitch tries a new tactic to “subvert” your ad blocker and force you to be a boomer, you will have multiple ad blockers competing to block them.

Well I hope this helps, I will be putting out articles often.

About Pb101
Pb101 is a youtuber, streamer, and writer. He is from Florida, a Christian, and a beast.
comments powered by Disqus